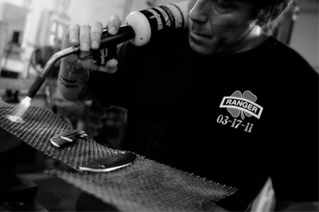 Knifemaking is one of mankind’s oldest activities, with crude edged tools predating the rise of Homo Sapiens by at least 300,000 years. It has continued to be a pursuit of every society of man, across the span of human existence and in every clime and place in the entire world. And with such a long history of edged weapons making, it is extremely difficult for anyone to be truly distinctive in bringing new ideas to making knives.

Mick Strider is that exceptional person, a man who has routinely brought innovation to the craft of making knives. Mick Strider’s early years were unremarkable except for his unyielding desire to excel at whatever he was doing. This drive ultimately led him to enlist in the US Army, and attain the high distinction of becoming a member of one of its Ranger Battalions. His military career was cut short due to injury. After the disappointment of his unexpected discharge from the Army, he drifted a bit in life for awhile. However, in 1988, he began making specialized knives for use by the military. This turned out to be fortunate turn of events, both for Mick and for the knife using world at large. Mick’s approach was to not get burdened by the weight of past designs. He started with a tabula rasa, a clean slate, informed only by his own experiences and knowledge of what a soldier needed in a knife. The knives he made didn’t look like the hunter-inspired knives seen in most PXs; instead they were almost brutish in their functionality: beefy, solid, and with unbreakable ¼” stock full tangs. These knives were the first indication of his innovative approach: in addition to their utilitarian design, the knives carried a subdued finish and subdued sheaths. No one carrying a Strider knife was going to be spotted because of sunlight glinting off of polished steel or a glossy leather sheath. Soldiers, policemen, and other men going into harm’s way couldn’t buy them fast enough. Mick sampled some good ideas, but made them great. For instance, he was not the first to wrap a knife handle with paracord, but he was the first to do it in a way that was tough enough for sustained infantry use. 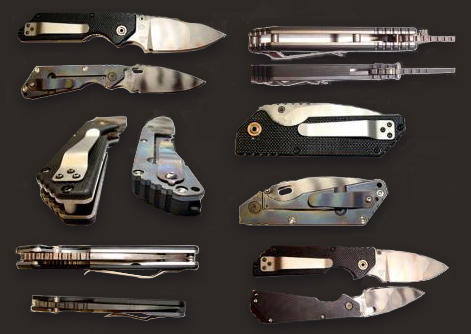 His knife line grew over the following years to include different varieties of fixed blades, all distinctive and many with specialized uses. But constant in all of them was a disregard for convention, and a desire to try new ideas. An example of this was the Ajax – it featured a very wide blade surface clearly designed to inflict damage. It drew on the weapons carried by Roman legionnaires, yet was modern and usable in the 21st Century battlefield. Mick also worked on his technical skills, always striving to become better at the physical craft. At the 2002 Blade Show, a group of the best tactical knifemakers in the country decided to compete with each other to produce the most innovative and interesting fixed “battle blade” at the show. Mick’s entry, an incredible integral knife made out of ½” titanium stock with a zippered composite blade, gorgeous handles, and integral guard was the unanimous winner, and effectively retired the competition. 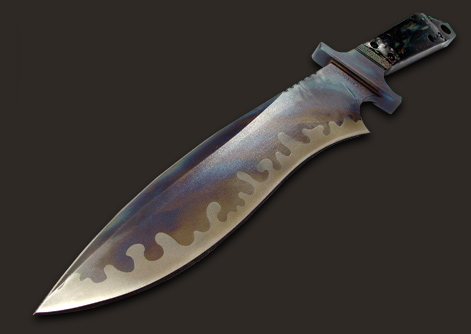 Still, despite the many innovations incorporated in these knives, they paled in comparison to his first effort in making a folder: the AR/GB. These twin folders (they are the same except the AR is a spearpoint and the GB a tanto) created an entirely new category of folding knife. They were designed to be as strong as a fixed blade when open, using overbuilt parts throughout. The design succeeded spectacularly, and resulted in a host of other makers trying their hands at making similarly stout knives –imitation being the sincerest form of flattery! The success of these folders was eclipsed by the hugely popular, and in many ways even more innovative, SnG/SMF/PT style of folder. This configuration, combining a thick titanium lockbar framelock with a linerless, integral G-10 composite handle, was a large stride forward in folder design, and looked obvious only once he presented it. It, in turn, spawned an even larger horde of imitators – including some of the most famous and successful folder makers in the world. Yet the acme of Mick’s innovative folders was still to come.

A long time in the making, the arrival of the SJ75 series of folders in 2012, twenty years after he initially embarked on his knife making career, again broke new ground. The SJ75 has a whole host of unique features that are both profound and subtle simultaneously. Not content to rest on the successful features of the previous folders, Mick created an entirely new pivot system for the SJ75; he increased its internal strength using revised stop pins; the popular but inelegant disc to prevent overflex on the lockbar was replaced with the simplicity of a 45 degree angle cut on the bar itself; and, the very manner in which the blade is presented was revised by changing the handle angle echoing the poignard. Most impressively, the knife accomplishes all this in a deceptively simple design. This, then, may be the most important way to view Mick’s knives and design philosophy: he is a Minimalist. He starts with no preconceived notion of what a knife should be, and then he relentlessly strips away everything that is not absolutely necessary in the design until only the functional remains. And, while he has a strong sense of humor (who else would create a skeleton handled knife by cutting the silhouette of an actual skeleton into it?), it is never given reign to impede the usefulness of the knife. There are a host of other innovations of his, which range from the now-ubiquitous tiger striped blades to the inclusion of a choil to allow repeated re-sharpening at the correct, original angle. But Mick Strider’s absolute dedication to making the correct tool for a given task, and nothing more, is perhaps his single greatest contribution to his craft.